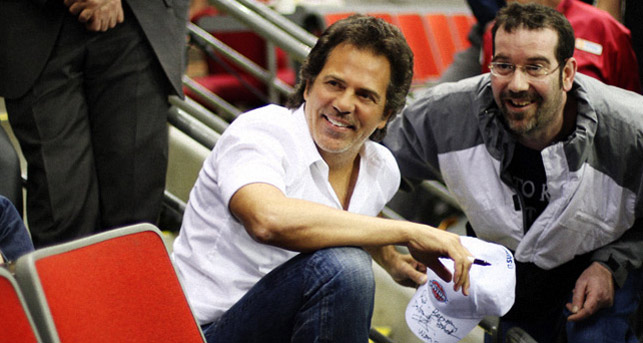 When the topic turns to the public charter school that bears his name, Jalen Rose becomes a preacher.

The ESPN/ABC analyst, who starred at Michigan and played 13 seasons in the NBA, mimics a proud parent while advocating for the Jalen Rose Leadership Academy, which he co-founded in 2011.

The passion is also apparent when he brings up JRLA benefactors like Platinum Equity chairman and CEO Tom Gores, who owns the NBA’s Detroit Pistons.

“So many things literally come from donors, and that’s why it’s very important to not only spread the word about what we’re doing, but also hopefully have game-changing donors that can really help influence the vision that I have for JRLA,” Rose told Platinum Equity recently.

For the seventh straight year Platinum Equity, the firm Gores founded in 1995, sponsored the Jalen Rose Golf Classic, the annual fundraiser for the school located in the northeast Detroit neighborhood where Rose grew up. It was held at the Detroit Golf Club.

It was the 10th time celebrities and politicians came together to help the school’s mission to provide an educational lifeline that starts in the ninth grade and lasts through college.

“That’s what Tom and Holly was able to do with JRLA. And that support has been there since Day 1. Whether it’s donating so we can get some of the things done at JRLA, but also sponsoring our golf outings and bringing other relationships to the table that either become donors or people that show support in another way, it’s major,” said Rose.

The mission is even more critical as students start the 2020-21 school year under the specter of the COVID-19 pandemic. Rose said the school will use distance learning for the first few months – a task helped by Platinum Equity’s support.

Pistons vice chairman Arn Tellem, who joined the franchise in 2015 to represent ownership in the Detroit market, isn’t surprised to see Rose’s education advocacy. He has known Rose since his playing days, when he served as Rose’s agent. Tellem had an inkling Rose’s social awareness would lead to his current focus.

“The thing that always impressed me about him was that he had a social conscience, wanted to give back to Detroit, wanted to make a difference in his hometown,” Tellem said. “He recognized the platform that he had to do good things, he didn’t run away from it.

“Jalen has been one of the leaders making a difference in this community for a long time.”

But for Rose, the relationship with the Gores family goes beyond the financial support provided to the school.

Rose recalls Platinum executives joining him on trips to the JRLA campus shortly after the school opened.

In 2013, Gores and his wife, Holly, donated $250,000 to the JRLA. Starting the following year, Gores and Platinum Equity have served as sponsors for the event. Rose easily recalls visits to the couple’s home in Los Angeles. They have bonded over their shared Michigan upbringings.

“They’ve always been loving, caring, thoughtful, and trying to figure out ways that they can help and support,” Rose said. “The way he loves Flint and the way he knows Michigan State, for them to fly the JRLA flag in the same manner, it really means a lot to me.”

It’s support that Rose finds even more relevant now with big business trying to find the right words and actions to address decades of systemic racism in this country.

“You see corporations and companies sending out e-mails and promising to be more diverse, and how they are open to make change and to listen,” Rose said. “At 47, I’ve heard that my whole life, but then there are some people that actually step up and do it.

“That’s what Tom and Holly was able to do with JRLA. And that support has been there since Day 1. Whether it’s donating so we can get some of the things done at JRLA, but also sponsoring our golf outings and bringing other relationships to the table that either become donors or people that show support in another way, it’s major.”