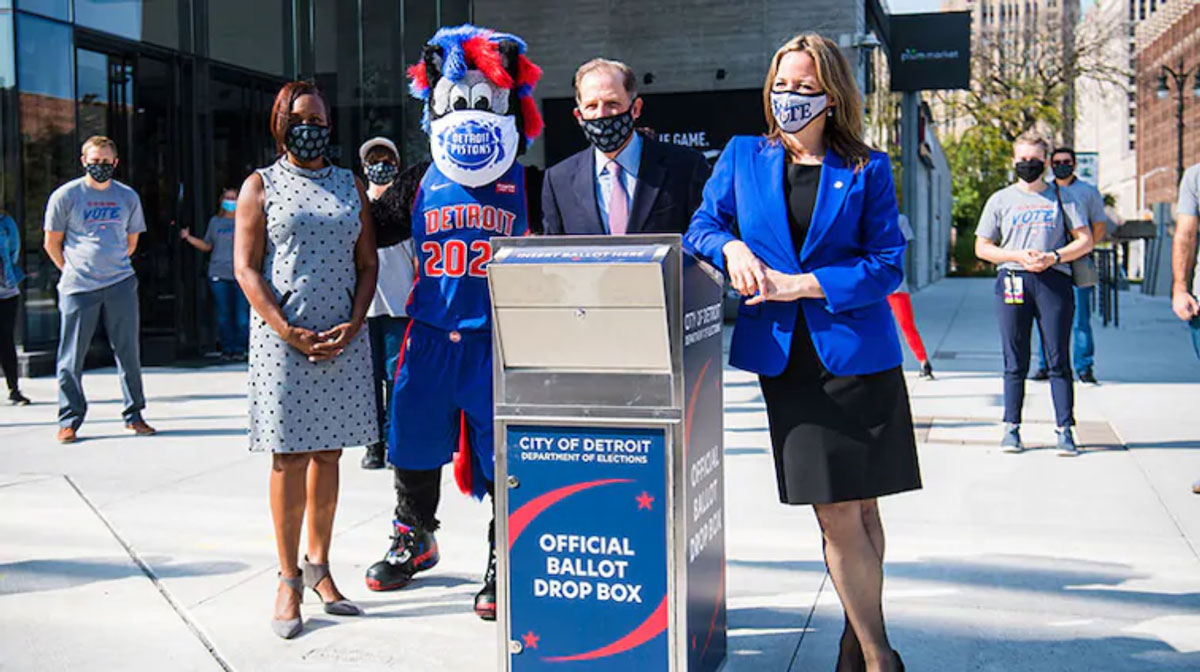 The Detroit Pistons continue to assist those efforts.

Starting Sept. 24, Michigan residents could submit absentee ballots to locations around the state. The PPC receptacle is one of 30 in the city of Detroit that will be available daily until Nov. 3.

Tellem did the honors in cutting the ribbon and afterward Benson noted the Pistons’ civic engagement since Platinum Equity founder and CEO Tom Gores said in a statement that words were not enough to address calls for change in the wake of George Floyd’s death in late May.

“Our organization is committed to promoting informed participation in the electoral process,” Gores said in a news release. “We are pleased to partner with the secretary of state on its efforts to register and enroll eligible voters for this year’s elections.”

In that statement, Gores and the Pistons pledged to:

Shortly after the statement, the Pistons announced the PPC would be used to facilitate voting efforts starting with the August primary all the way through the November general election – one of the first franchises to make that pledge.

Abrams helped the franchise kickoff the efforts with an inspirational speech to Pistons staff and Harris, the Democratic vice-presidential nominee, was the keynote speaker for a rally held in the PPC parking lot encouraging Detroiters to vote.

“Our organization is committed to promoting informed participation in the electoral process,” Gores said in a news release. “We are pleased to partner with the secretary of state on its efforts to register and enroll eligible voters for this year’s elections.”

Employees have contributed time to voting and census awareness, and other civic efforts, which includes launching Mission 313, a project where players, coaches and staff are encouraged to dedicate at least 31.3 hours of their time for charitable efforts.

The deeds are the main headlines, and there is more to come from the Pistons. Vice president of community and social responsibility Erika Swilley said Gores’ statement set the tone.

“I couldn’t do the work that I do without the blessing of our ownership group, giving me the freedom and giving me the go-ahead in these types of things is huge,” Swilley said.

One of the first

The Atlanta Hawks were the first NBA franchise to announce their arena would be made available to help during this election year.

A couple of days later, the Pistons followed suit by making the PPC available.

Both organizations were moved to act shortly after Floyd was killed in the custody of Minneapolis police officers.

Floyd’s killing – and the deaths of Breonna Taylor and Ahmaud Arbery – sparked a wave of protests throughout the country and forced a racial reckoning that is still ongoing.

In response, Gores and the organization denounced “issues of racism, police brutality and inequitable justice.”

Gores added: “We will use our platform, our creativity and our persistence to drive action in hopes of making this moment a turning point.”

Gores purchased the Pistons in 2011.

The organization moved quickly on the voter galvanization directive.

The PPC will be a satellite center for the Nov. 3 election, where people can register and vote. Afterward, the ballot can be placed in the drop box outside the PPC. Election day will be a paid off-day to ensure all employees can vote and volunteer as election workers. The PPC also served as a receiving center for four voting precincts for the August primary.

The Pistons’ website has released multiple public service videos reminding Michiganders the importance of voting. The SOS office has also assisted in getting Pistons players registered.

“The Pistons were one of the first teams to step up and say we want to be part of making democracy work this year,” Benson said. “That’s what the Pistons believe in and dedicated their work to, and they’ve just not talked the talk, they’ve walked the walk.”

Many pro sports franchises have followed suit. In Detroit, all four major professional sports teams have agreed to make their facilities available to assist with voting efforts.

With an expected record turnout, these spaces are needed to mitigate large crowds on election day when social distancing will still be needed to stop the spread of the coronavirus.

The Pistons efforts have drawn the notice of elected officials.

“It sends a very significant and positive message,” Winfrey said. “I’m not really a sports girl, but I do know that sports teams are getting involved in social issues that plague our country, so I think it sends a positive message.”